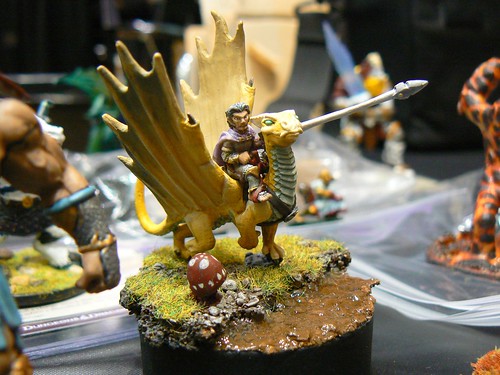 In 1974, Gary Gygax revolutionized the world of fantasy games by publishing the first edition of a game: it was called “Dungeons & Dragons”, and it soon became clear that the potential was so big that other game designers tried to jump into the cart producing similar games (now collectively known as “role-playing games”), even clones or with similar names (“Tunnel & Trolls”, etc).
The idea behind these names is simple: in fantasy role-playing games, our heroes often happen to wander within dark places (Moria, from Tolkien’s The Lord of the Rings, anyone?) inhabited by fearsome presences (goblins and the Balrog, from Tolkien’s book).
Even molecules, sometimes, happen to “travel” through places they don’t like (we call them “transition states” or “high-energy states”), during the reactions which will guide them to the “treasure chest”: to become a product of the reaction itself.
However, these dark places are sometimes inhabited not by dreadful monsters, but by benevolent creatures; the catalysts. These species are able to facilitate the “passage” from reactant to product for our molecules, while staying unmodified at the end of the reaction. How do they do that?
It has occurred to me several times that undergrads think about catalysts like they would about magic wands: after all, catalysts let reactions happen which would otherwise seem really impossible (biological reactions are top of the list!). This behavior of a catalyst can be attributed to the ability to reduce the energetic level of the transition state by changing the reaction pathway.
It’s the same reason road-builders hollow out a mountain for car or train tunnels, instead of climbing over and then down again. A simpler, more affordable route is by going through a tunnel!
In the Physical Chemistry textbook, Chapter 9 deals with chemical kinetics, the study of rates of chemical processes. Catalysts are able to reduce the energy of the transition state, they can raise the speed of the reaction.
Eleven years before the launch of Dungeons & Dragons, a more important event took place: the Nobel Prize for Chemistry was awarded (first time, and unfortunately last time so far) to an Italian scientist: Prof. Giulio Natta, who was supervisor for Prof. Corradini, who was supervisor for Prof. Villani, who has been supervisor for… well, me!!!
Giulio Natta (along with Karl Ziegler) was awarded the Nobel Prize for his “discoveries in the field of the chemistry and technology of high polymers”, having studied catalysts able to produce plastics with controlled properties. The history of these catalysts has been long and difficult, and even now (after 50 + years) we still strive to develop new catalysts. Those able to let us produce different (hopefully, better) products.
I leave you with a picture to show you how an example of how these catalysts have evolved in the last years: