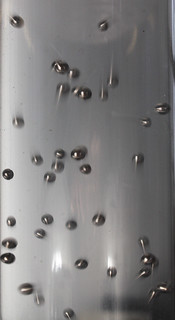 Temperature has a strict relation to kinetic energy; this much is clear, but sometimes it’s not as clear as it should be! As human beings, we usually “believe” more in what we can touch than in what we are made aware by equations; and, definitely, energy is something we cannot see, or touch. Right? On the other hand, we can see a thermometer, or we can touch something hot and/or cold, and in this way rest assured that temperature DOES exist.
This is probably a major issue for those seeking to study science, who are bound to believe that yes, all of these weird equations really have something to tell about the real world. But how can we bridge the gap between what we see (aka, temperature) and what we need (aka, kinetic energy)?
The kinetic molecular theory gives us such a bridge: molecules cannot be frozen in a certain fixed position; they can move, as fast as their kinetic energy allows them. Basically, if you try (don’t!) to hammer your finger two times, the first one by gently tapping the finger with a gently-moved hammer, and the second one by striking the poor finger with a violent hit, you’ll have a good idea of the difference between the same object, when moved at different speeds.
The same applies to our molecules, especially those in gaseous phase: their velocity depends on their kinetic energy, which is related to their temperature. So, hotter molecules are faster molecules, and faster molecules have the ability to strike the recipient’s walls with higher force. Does this imply that higher temperatures mean higher pressures? Yes, it does! Thanks to these relationships, the task to imagine the molecular nanoworld (even if we can see down only to some micrometers) is made easier, and all the marvel and the gracefulness of the world of the molecules come to our brain in their enchanting beauty!
In the Physical Chemistry textbook, the bridge is made perfectly clear: pages 1-34 and 1-35 (free Chapter 1) describe with ease and precision, the relationship between temperature and kinetic energy, as well as demonstrates how this link can be calculated. Equation (1.50), see image below, is one of the most important results of the molecular theory of ideal gases, and the demonstration of Avogadro’s hypothesis (Eq. (1.52) ) sheds even more light on the value of this discovery.

As far as my experience as a professor for undergraduate courses of chemistry goes, I have more than once witnessed the power of easy explanations for difficult concepts: kinetic energy is, usually, one of the more difficult notions our students need to start as soon as possible to manage, because when it becomes a familiar concept it opens the possibility to explain kinetic chemistry concepts as well as thermodynamic ones!